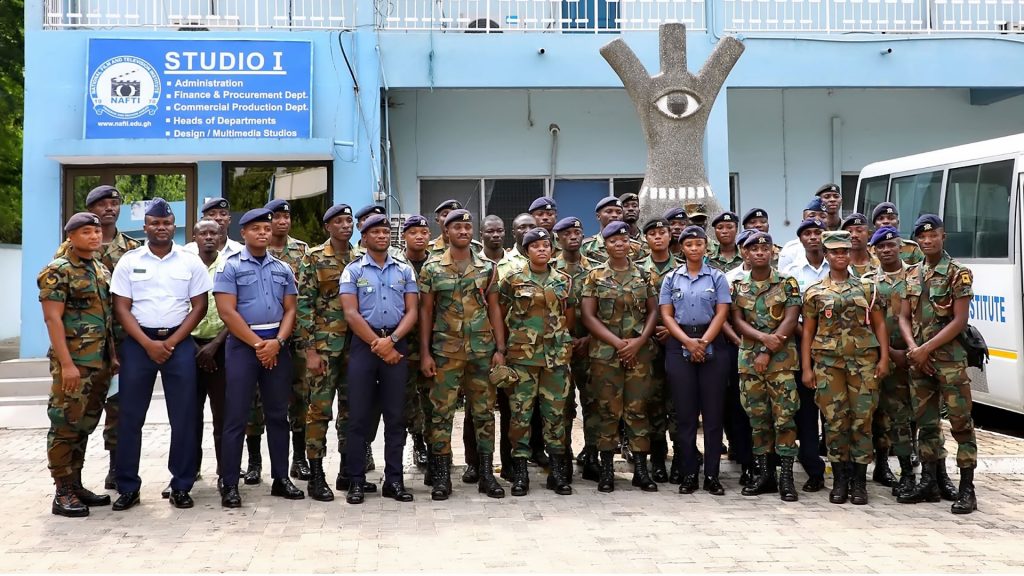 As part of the ongoing relationship with the National Film and Television Institute (NAFTI), personnel of the Ghana Armed Forces paid a visit to NAFTI on a familiarization tour on the 14th of June 2022. A total of 60 military personnel led by WOI Francis Fugar took part in this exercise. This familiarization tour was part the annual tour of astute Media Training Institutions and selected Media and PR personnel of the Ghana Armed Forces, as part of a training exercise run by the Directorate for its personnel. Receiving the team, the Director of Works and Physical Development of NAFTI, Mr. Stanley Opoku-Yeboah welcomed them on behalf of Management and said the Institute was delighted to have them tour the facilities and exchange ideas to cement the relationship between NAFTI and the Ghana Armed Forces.

The tour started with the Television Studio inside NAFTI Studio III. Mr. Stanley Opoku-Yeboah, took the team through the process of production and the equipment available to students to use during their productions. He also introduced them to the Technical Department of NAFTI and the role they play in fostering a students’ productions. The team was delighted to see a student producing a final year production in the television studio during their tour and were delighted to have such an experience. Mr. Yeboah took the team to the Editing Suite where they were introduced to the equipment and editing software, students were being trained with.

The team later visited NAFTI’s Studio II which houses the Broadcast Journalism Department of the institute and they were taken through the day to day operations within the department and some of the courses.