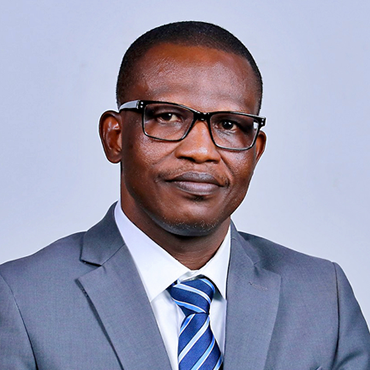 Mr. Doria B. Z. Danuor is the current Registrar of the National Film and Television Institute. He is a seasoned professional Film Sound Recordist and Film Sound Designer with over 17 years of teaching and industry experience as well as over 7 years of management experience in Higher Education.

Mr. Danuor holds a Diploma in Film and Television Production from the National Film and Television Institute (NAFTI) and a Master of Arts Degree in Sound Design for the Screen from Bournemouth Media School, Bournemouth University, United Kingdom. He also holds a Post Graduate Diploma in Teaching and Learning in Higher Education from the University of Education Winneba.

During the same period, Mr. Danuor served as Chairman of the Disciplinary Committee, Short Listing Committee on Students’ Admissions, and a number of other Committees. His works on the Disciplinary Committee in particular pertaining to disciplinary issues involving both staff and students received a number of commendations from Management. He is well-grounded on staff and student-related issues. His hard work earned him a Certificate of “Recognition of Dedicated Service 2012” from NAFTI,

Mr. Danuor joined the service of NAFTI as an Assistant Lecturer in 1998 after his National Service as a Teaching Assistant at the Institute and rose through the ranks to a Lecturer and substantive Head of Sound Department in 2005. He was appointed the first Head of the Film Techniques Department under the restructured departments of the institute in 2013 where the Photography, Sound, and Editing Departments were merged as one department, the Film Techniques Department. Mr. Danuor served in this capacity until his appointment to the high office of Registrar in 2015.

Over the past six years as Registrar, Mr. Danuor’s pleasant disposition and good human relations have endeared him to both staff and students. He is a good team player who has demonstrated strong leadership and organizational competencies in the discharge of his duties towards the achievement of the objectives of the Institute. He is committed to the development and growth of NAFTI by ensuring that the Institute maintains its hallmark of professionalism and discipline that are required in the training of students in the creative arts.  It was during his tenure that the Institute was migrated from the Ministry of Communication to the Ministry of Education and is now one of three Institutions under the University of Media, Arts, and Communication (UMAC).

As Registrar, Mr. Danuor has participated in several seminars and workshops pertaining to Administrative procedures for University Administrators, Public Financial Management ACT 2016 (ACT 921), and The Public Procurement (Amendment) ACT 2016 (ACT 914). He currently serves as Secretary to the Board of Governors and Audit Committee of the Institute.